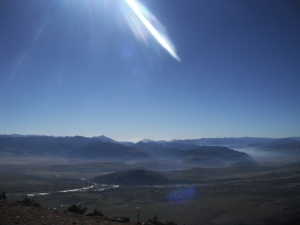 We were up early and about so we could pick up the ride for the TRAM to go up the mountain directly from where we are staying at Teton Village.  The ride takes 12 minutes very slowly and is a magnificent view.  Once we arrived at the top which is 10,000 feet we did the usually with the pictures and then found our way down the mountain pathway to find a location for our ceremony.

We walked about ½ mile and the trek down was steep so all I could think of was the walk back up.  Really being in the moment, huh????  We found a clearing behind some trees facing the southwest direction.  We then set up a medicine wheel with the rocks representing the four major directions of the East, South, West, and North with a large rock in the middle representing the Great Spirit.  We used smaller rocks to represent the Southeast, Southwest, Northwest and Northeaster directions along with filling up to create a complete circle.  We walked three passes outside of the circle to create, energize and make the circle sacred along with calling upon each of the aspects of all live in the Oneness of Creation.  For each of the directions I added an extra energy by asking the Spiritual Hierarchy to create ascension columns in the four major directions and a Golden White Ascension energy for the center stone.

We were ready but I was not prepared for people coming into our area and walking through the medicine wheel.  I was trying to be patient but it is a sacred circle.  I realized that it was representative of how we are living presently.  As our vibrations raise upwards, we still have to interact with the lower forms of energy of the third and fourth dimensional realities.

We called upon the 22 Rays of God to assist us in bringing forth healing to the land and within ourselves.  Judy and I each stated our intention for this ceremony and moment.  I also included everyone that was interested in being part of this ceremony.  At this time, I could hear there was an Eagle to my left, in the Eastern direction.  He was talking to us several times. I felt it was a great blessing. As we were sitting there, we saw in Etheric form, many masters rallying around the circle on the outside.  I then envisioned St. Germain, Master Confucius on his right, and then Master Lanto on his left.  They blessed us with their presence and then I channeled a meditation for us to visit the Mountain Retreat.

We were gathered together in a beautiful Merkabah vehicle which encased all the beautiful colors of the rays, blues, violets, greens, reds, pink, lavender, yellow, gold, platinum, etc.  We then were guided to the top of the Teton Peak and the vehicle went in front of the entrance.  There were large heavy doorways that were opened.  We were then guided to go down a crystalline tubular structure in which we went deep into the core of the earth.  We were guided into a room where many masters were honoring our presence.  Judy and I were then each guided to a different part of the temple where we conversed with specific masters for our personal mission.  This is where anyone who joined us would receive the lessons that would be pertinent to their own pathway.  After several moments, we were guided to step into the Merkabah once again to return to our original place of physicality.

We then closed up the energies and I asked the ascension columns to be sent down to the core of the earth.  I asked that the healing of the earth would compensate a 500-mile radius.  It was then time for us to trek back up the mountain and take the TRAM back down.  As we were walking up, we saw the Eagle flying around us.  We tried to take a picture but he was so quick.  He was pure black with white wings ~another gift being given to us.

We took time to eat and relax for awhile.  My energies were completely out of whack and I was not grounded at all.  St. Germain gave me the message that we should travel to Leigh Lake as there were two people there waiting for us.  Of course, we did as we were asked and I even took a quick 10 rejuvenation nap.  Leigh Lake is an extension of the south part of Jenny Lake so we had to walk about a mile through the woods.  The lakes are amazingly beautiful and Leigh Lake is a left-over glacier.  As I am walking, I am very uneasy.  There is that fear of the Bear energy.  I know that I am always protected but there are signs everywhere that they are very active in that area.  We met some interesting people along the way and took amazing pictures.  It was late in the day so the sun’s rays coming through the woods were amazing.  The pathway was wide and pretty flat so it was not a hard hike.

We finally reached our destination.  We could see the lake in the distance and then you walk down a flight of steps to get to the base.  It was so beautiful.  Judy decided she needed to cleanse herself so she disrobed.  We both had two pair of light pants on with layers of T-shirts.  She went to her base and fully emerged herself in the waters.  Now it was freezing, believe me but so refreshing.  I decided I wanted to do the same but would wait until we got back to Jenny Lake as it was right near the parking lot and I would not have to walk in wet clothes.

Our energies changed greatly.  We did meet two people several times so I think they were all important connections.  I was asking St. Germain about the reason we needed to take this hike and his first answer was, walking through my fear and finding our strength.  I know what my lesson was and I am sure Judy knows hers.  Possibly some of you may be going through the same things.  He also told me there was a surprise for us.

As we were about ½ mile back, we passed two individuals on horses.  We were right next to them and the first one was golden.  I mentioned to the rider, “how beautiful they are, and what a gift to receive.”  I was in tears as the horse looked me deeply in the eyes and I was moved beyond what I could ever receive.  Thank you for the “Power and Strength”.

We were then at the end of the pathway and this gentleman came out of nowhere behind us.  He had white curly hair, about 5’8” wearing a lavender vest and light green shirt.  He wore a floppy hat.  He stood there and talked to us about 10 minutes asking us where we had hiked and was complimenting us on what we had accomplished during the day.  I introduced ourselves but he did not give his name.  He said he was from Wisconsin and said he likes to travel.  One of the places he visits is Manhattan, NY and we laughed because of the energies there.  He said he was a “song and dance man”.  So we are standing there trying to figure this out because we know he is giving us a message but not sure who he is.  He also told us if we go to Yellowstone to the Geyser it should be very early morning.  We parted ways and Judy and I kind of looked at each other in “who was he?”

It was then my turn to dive into the freezing waters.  So I did the same as Judy stripping down to my exercise pants and T shirt.  The water was refreshing but freezing.  It was actually very exhilarating…I laid on my back and dunked my head three times for cleansing and purity.  I jumped out very quickly and it was interesting – not a soul around so I was able to change my clothes.  It’s so nice to be in the woods….Remembrance of my childhood.

We got back to the car and started our drive back into town.  We were discussing the gentleman we met and I then realized it was my father.  There were several clues.  He had the same built, my father tapped dance and was a “song and dance man” in his time, he was born in Wisconsin and had the same built.  He also wore funky floppy hats.  I realized he was there as a thank you for the Masters.  My father has ascended greatly in five years and he was a 32nd degree Mason.  I then asked him and he said it was him.  He was asked to meet with us as a act of gratitude of the journey we have been on.  I was in awe that we were acknowledged in this way.

We found a place to eat very late and I am writing this on Wednesday morning as I was so tired last evening.  Internet is not very good here so not sure when the blog will get posted.

Today we are off to take a boat ride at Jenny Lake to go hiking to a waterfall and Inspiration Point.  We both believe this is the entry point to the retreat.  So much to take in and experience on all levels.  Thank you for being here with me.

In Expressions of Oneness,

Expert in Ascension Mastery 5D Body Healing & Attunement ~ Rev. Christine Mahlariessee Heliohah. As a Vibratory Ascension Master transmit required vibrations via voice communication, and energetics through their unique form of teaching. Rev. Mahlariessee (formerly spelled Meleriessee) is a 30-year trained Master in the accurate and correct development of Ascension Mastery having been ordained personally by Dr. Joshua David Stone (Master Joshua Stone). A Fully Integrated Transmitter of only the purest Divine Vibration to bring forth the highest frequencies currently available for humanity. Rev. Ara incorporates these elements to hold the grounding necessary for the transformational energies to be accessed upon Gaia. The energies act in unity to assist an individual realize the I AM presence and Higher Self within in ways not achieved through other forms of Spiritual practice or study. Mahlariessee's work includes skilled facilitation in both Shamanic Mastery and Integrated Healing Modalities. View all posts by Rev. Christine Mahlariessee Hayden